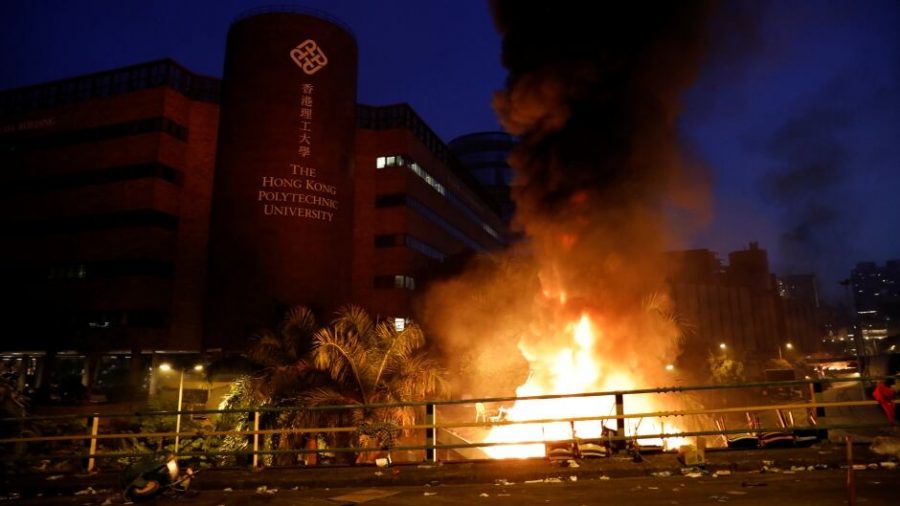 A battle between Hong Kong protesters and the police lasted for three days from Nov. 17 to 19, and by the evening of Nov. 19, around only 50 protesters remained. The protesters were stuck in Hong Kong Polytechnic University and surrounded by police. Eventually, heavily armed forces arrested over 1,000 protesters, the majority consisting of high school and university students. The charges could lead up to a maximum of 10 years in prison.

Encompassed from all sides, students either fled or were arrested. Some students unsuccessfully attempted to escape through a sewage pipe and had to seek medical attention afterward, while others successfully fled with motorbike drivers waiting at a nearby bridge. The protests in Hong Kong have been ongoing since June over an extradition bill that has since been withdrawn.

This confrontation between protesters and police have been the most violent so far. Some protesters even armed themselves with handmade bows and arrows and Molotov cocktails while police were reported to have fired over 1,000 cans of teargas and rubber bullets. Violence has escalated to throwing petrol bombs at police who threatened to fire live rounds. The protesters proceeded to burn the bridges leading to Polytechnic University. Police then barricaded the remaining bridges, effectively trapping the protesters in.

One pro-democracy legislator, Ted Hui, said, “This is not a surrender, and we are not turning ourselves in. We are simply leaving,” as he was ushering some students out of the school. Students aged 18 and up were arrested, while minors were questioned but allowed to leave. Around 200 of the protesters were minors. People were sent to hospitals after being injured from attacks by the police. Some suffered from hypothermia after being hit by a police water cannon.

In response to the clash, the Standing Committee of the National People’s Congress in Beijing struck down a Hong Kong court ruling that overturned a ban on protesters wearing face masks. This essentially meant that the National People’s Congress had the authority to change and interpret the legal issues of the Basic Law, Hong Kong’s mini-constitution. This ruling furthers fears of Beijing’s attempts to undermine Hong Kong’s autonomy.

The new chief of Hong Kong’s police force, Tang Ping-keung, became commissioner of police after authorization from the central government of Beijing. Tang said, “If everyone had come out earlier to condemn the violence, society would not have turned into this state in five months.” He places the blame on the public for continuing to motivate or tolerate violent acts. For now, however, worried parents stand outside waiting for their children as police continue to face off with the remaining student protesters.