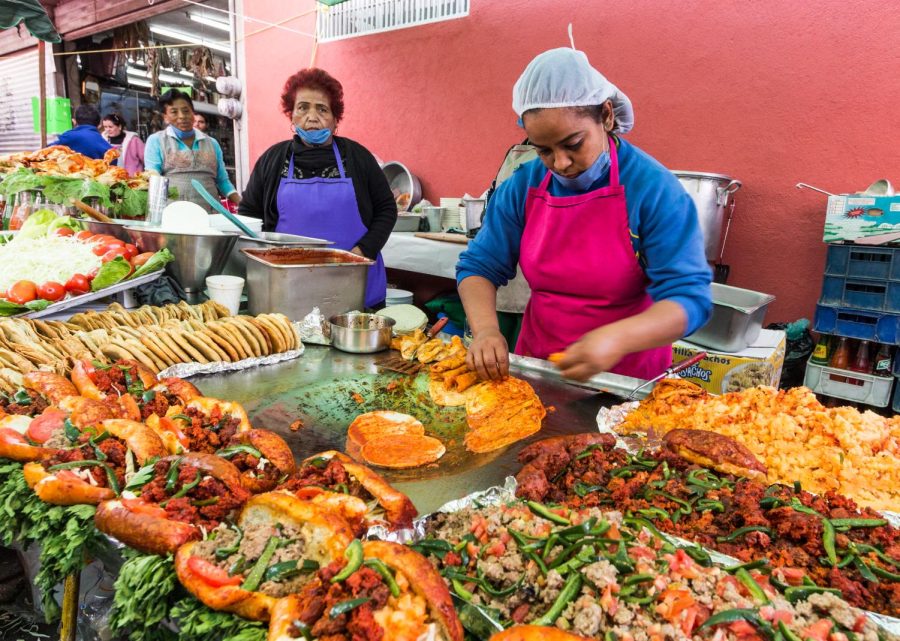 “Elotes por $4!” “Flores por $10!” I walk down the streets of Los Angeles in remembrance of my childhood; skipping hand in hand with my mother to the nearest street vendor, patiently watching the man quickly yet gracefully putting mayonnaise, cheese, and butter around my corn and bending down to hand it to me. That man was my uncle, a recently deceased street vendor in Los Angeles, who looked for a way to support his family in a way he knew how after immigrating to America from Mexico.

The narrative forced upon street vendors in recent years of being “dirty” or filling up all sidewalks is greatly upsetting after watching throughout my whole life the hard work and dedication the street vendors put into their art. In efforts to gentrify Los Angeles, a project is pushing Mexican immigrants out of jobs and encouraging big business tycoons to franchise Mexican culture, a culture that has encapsulated Los Angeles since the 1920s.

From Elotes, chile-covered mangoes, and fresh coconut water to flower bouquets, we have all seen it. This sacred form of complacency to me and many other Mexican-Americans that instilled a sense of community is slowly becoming obsolete. Due to the stigma behind sanitary concerns in the solely money-orientated businesses, something that was once a tradition to many Hispanic people has now become a cash-cow operation.

Street vendors can no longer make a living off of what used to be a main source of revenue for them because of big businesses taking over. “La Real Michoacana,” a franchise spreading throughout California markets, brings the “culture” of the Michoacan to the Central Coast by delivering Mexican sweets to the public. The culture being referred to is vastly Americanized in order to cater to American society. It is no longer an authentic form of humility, but rather a business expenditure to assist the decrease of street vendors and further the effort of the beautification project in Los Angeles. Losing the spark of street vending is equivalent to many natives of Los Angeles disconnecting from a home tradition to franchised businesses that further raise the prices of Mexican sweets. Franchised stores like these being in a vendor-dominated area, subsequently means an area, where many families depending upon revenue from street vending, is now taken away from them; numerous households are left without an income and with a loss of their own culture.

These street vendors and their work have now, more than ever, been stigmatized and deemed practically obsolete with new business expenditures arising that destroy the foundations of what was comfortable and known to many Mexican Americans. This restaurant takes what every street vendor sells and puts it into one store, overselling street vendors, and putting their lives for them and their families at risk.

“There are so many families that depend on this site. For example, my family—this is where the income comes from,” street vendor Bryan Fuentes told ABC7.

Mexican culture is enriched with sharing of traditions with others—street vendors make this possible. The art of making Elotes, chile-covered fruits, and pupusas is a talent one must possess to capture the raw authenticity of the culture. Thinking back on her time in Mexico, my mother, as well as many other Mexican immigrants, feels welcomed and almost as if she were back in her hometown when conversing with the street vendors. It happens to remind my mother of the times when she was a little kid with a few coins in her hand running to purchase a simple paleta (ice cream bar). Street vendors produce a reminiscence of home in comparison to big businesses that will never elicit the same feeling of comfort in their customers.

As of 2022, when I walk down the streets, I no longer see the same number of street vendors there once were. This change is a result of an order sent out as of May 13, in which the City of Los Angeles increased its expenditures in gentrifying, I mean beautifying, the Los Angeles area. This order was sent out in an effort to clear out street vendors from the Pico-Union, a vendor-dominated area, in order to further “beautify” Los Angeles. This process of beautification of Los Angeles for many Mexican Americans is a blunt obliteration of Mexican culture and an effort to gentrify Los Angeles, further pushing many street vendors who rely on vending for their income out of their homes as well. Humility is no longer considered when it comes to business expenditures, and the culture that became widespread since the 1920s is slowly being erased.

Although the reasons for the decline in street vendors vary, the main pattern is the influx of franchised businesses taking over street vendors’ original positions in communities. The decline of street carts means a recession of Mexican culture in such communities but also an unfortunate empowerment of large franchises.