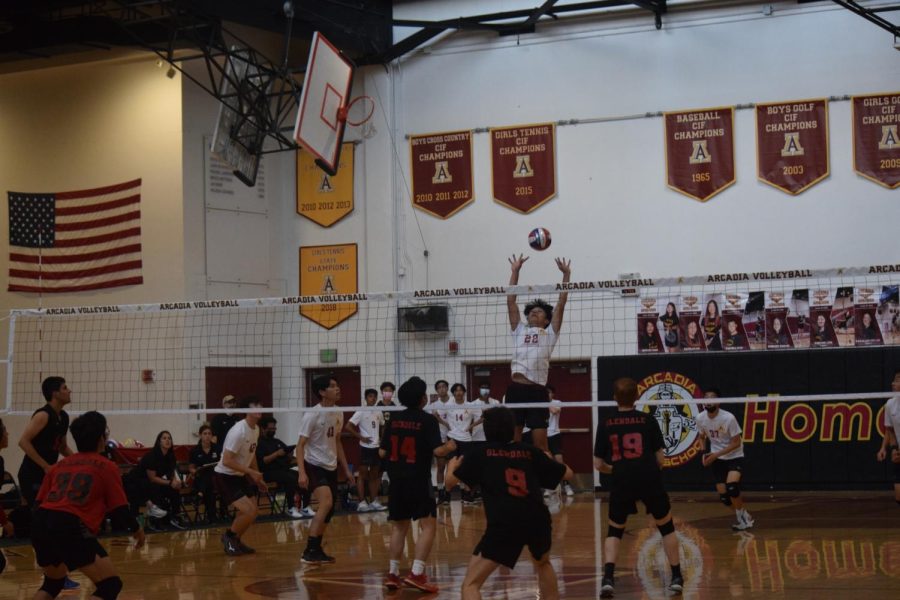 The Arcadia Boys Varsity Volleyball team scored yet another win against their rival Burbank High School as of Apr. 12, winning 3-0 in the three sets the two teams played against each other. Arcadia dominated the competition, outscoring the opposing team by at least five points each set. This added onto their winning record, currently being 18 wins and three losses; such a great record places them in the top few teams and third in the local Pacific League.

The first set is usually where teams get into their groove; a match can be decided early on if a team isn’t prepared for the start of the game. Arcadia stayed consistent with how they always play, team chemistry brimming with opportunities. While both teams traded points here and there, by the middle of the set, the Apaches were the clear dominant force in the gym, having an eight point lead over the Bulldogs. The team surely knew they were set to win this matchup and so prepared to continue to put immense amounts of pressure on Burbank. With the referee blowing the final whistle for the end of the first set, Arcadia won 25-11.

After a quick and easy intermission, the teams assembled back onto the floor for another set. Coming prepared, Arcadia was confident in winning this matchup. Reminded of their past win against Burbank and their victory in the first set, the team decided to push hard. This time, however, Burbank fired back, managing to keep up with Arcadia and making sure everyone was on their toes. With the passage of time and multiple point trades here and there, Arcadia hit 25 total points, with Burbank ending the set at 16. The Apaches, knowing they were in a very good position, celebrated. All they had to do was win one more set to win a best out of five and secure the game.

This break lasted a bit longer, with both teams gearing up for a fiery finish. Burbank capitalized on a tired Arcadia to try and mount a comeback into a continued match. Both teams began to be even closer than before, with teams tied up for the majority of the set. The game came down to a select few saving plays, making the matchup to end it all even more gut-wrenching. Fatigue began to get at a few from both sides, until Arcadia vehemently surged back to end the game in full. A couple bits of point trading and some powerful hits on the ball really got Burbank into a frenzy, ultimately ending the third set and so the game 25-20.

The team, knowing they’d won again, were happy to keep up their position in the volleyball world; even in victory they knew that the grind never stops and that even more work could be done to completely dominate the rest of the season. One member who shared this belief, senior Matthew Le, talked about his thoughts.

“I believe in my teammates, and I believe in our potential. With that being said, I know there are places to improve and things to fix for an even better outcome, meaning we should all still keep up the practice.”

The team performed wonderfully and will continue to do so. If the team keeps doing their best and showing who’s boss, the Boys Varsity Volleyball team will surely come out on top.