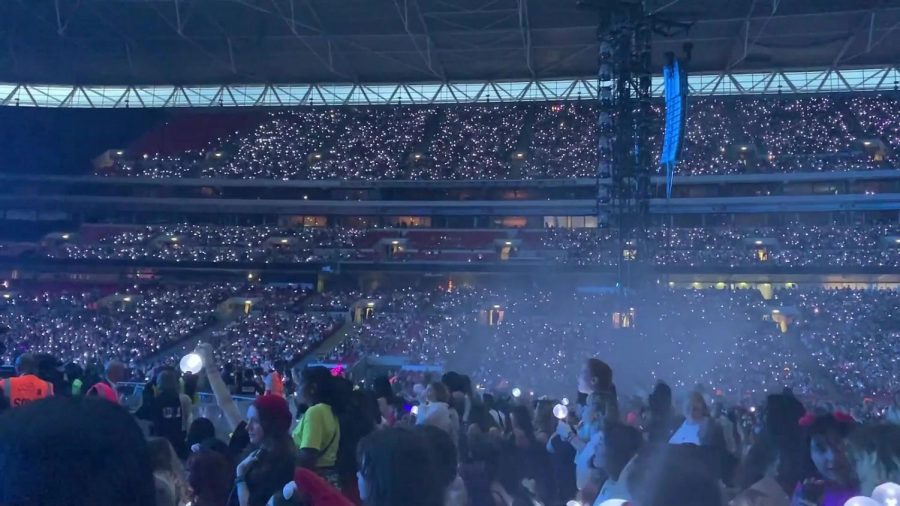 Bangtan Sonyeondan (BTS) is currently the most popular K-pop group in the world, so it’s no surprise why their fans were freaking out when they decided to have four concerts at SoFi Stadium in Los Angeles, California.

BTS consists of seven members: RM, Jin, Suga, J-Hope, Jimin, V, and Jungkook. Their fandom, ARMY, has approximately 22 million people in it, worldwide. Because of COVID-19, BTS has not had a concert in two years. The members were very emotional and cried while making short speeches to their fans. This year, their concerts at SoFi Stadium were held on Nov. 27 to 28, and Dec. 1 to 2. Fans were so heavily anticipating the event that tickets for all four nights were sold out in presale, despite the stadium having a capacity of around 50,000 people.

Their concerts were full of unexpected surprises, including special entrances from Megan Thee Stallion and Chris Martin. The stadium was full of ARMY “bombs,” which are light sticks that may even contain Bluetooth, so that users can control the colors through their cellphones. To reach fans sitting in the higher levels, the members were pushed on tall trolleys around the stadium.

The attribute that caught most fans’ attention, however, was their outfits. Jungkook and Jimin both wore shocking outfits, making fans gasp. J-Hope wore his classic bucket hat, while Suga wore a pink outfit. V made references to the new Netflix show Squid Game, rocking his Squid Game mask. Leader RM dyed his hair red, and Jin, whose birthday was on the last day of the concert, tied his hair with two bows.

Various lucky students from Arcadia High School were able to snatch tickets and see the seven members in real life for the first time. They shared their experiences on a fascinating night.

“This was my first BTS concert but probably the most memorable concert I’ve ever been to,” said freshman Chloe Shiu. “I couldn’t believe [the members] were real; the whole experience is still so surreal to me and if given the chance I would definitely go to another one.”

“The [BTS] concert was better than I would ever expect,” said sophomore Jeroen Miu.  “My favorite aspect was the energy from the crowd and the amount of support they had for the artists!” Also, I enjoyed the energy from the members since it’s hard doing a back-to-back concert and they were still trying their best to throw a big show!”

“I loved the variety of songs they chose from,” said freshman Jackie Aguilar. “Everyone was super nice, helped direct us to our spots, and showed us where our seats were. That day was the best day I’ve ever had.”

BTS was recently nominated for a Grammy in the Pop Duo/Group Performance category, so there is no doubt that they will be back in California again. Until then, fans can stay updated by streaming their music, watching their live streams, and most importantly, following their newly created Instagram accounts.